The company is an association of artists who work together on projects which explore space and place:

Alison began working in theatre in the North of England in the mid 1980s, collaborating with other artists to make work to tour around the UK as a writer, performer and director, and in theatre for young people through development work, encouraging youth services to work with theatre companies.

Between 2002 and 2010 she worked with Arts Council England as Performing Arts Officer in the Yorkshire region, with responsibility for Street Arts, Circus, Carnival and interdisciplinary practice, including science and art collaborations and International work, while continuing to make theatre, particularly in the North East. She sits on the board of IETM, the informal network for the performing arts in Europe and has just joined the board of Blaize a community arts company based in Yorkshire. She also works with arts organisations on a freelance basis to support organisational development and most recently with Unlimited Theatre as General Manager. She is has just completed a teaching fellowship in the School of Performance and Cultural Industries at Leeds University.

Matthew Bellwood is a writer and storyteller based in Leeds. Over the last few years, he has worked everywhere from the Canadian Fringe to the International Shakespeare Conference in New Zealand. Along the way, he has performed in schools, libraries, theatres and pop-up museums, at DIY rock gigs and, on one memorable occasion, to an audience of 1,200 girl-guides in a tent.

His stories range in style from traditional myths and folktales to interpretations of well-known literary classics. He also performs his own material – mainly stories about his life growing-up in Leeds.

As a writer, he is particularly interested in the beauty of the everyday, the futility of silence, the arrogance of the shy and the endless possibilities that life offers us to change ourselves, our lives and the lives of those around us.

When he isn’t writing, he runs a Theatre In Education company, Moveable Feast Productions, and encourages young children to dress up as Vikings (amongst other things). The company averages around a hundred and fifty performances a year. He also works with local libraries, theatre companies and arts organisations to create and run a wide variety of storytelling projects.

And together – we have created site specific performance pieces in Leeds, exploring places in the city often off the beaten track.

These include working with The Leeds Library, with Pyramid of Arts,  with communities in Seacroft, Headingley and Meanwood, with members of Heydays, and with Leeds Asylum Seekers’ Network. 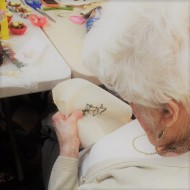