We have finished this performance project with the Lit and Phil in Newcastle in March 2011. We would like to thank everyone who made the piece with us in this inspiring space.

Sir Arthur Conan Doyle and Houdini had opposing views about Spirituality. ‘Edge of the Unknown’ was Conan Doyle’s account of their debate. The Literary and Philosophical Society of Newcastle upon Tyne commissioned A Quiet Word to look over ‘the Edge’ and take the audience with them …

‘Edge of the Unknown’ was a work of imagination of course, but was inspired and underpinned by research into a range of artefacts, narratives and publications relating to what we can know, and what remains beyond our ability to apprehend. The title of the piece is drawn from the eponymous book by Sir Arthur Conan Doyle, in which he explains his engagement with spiritualism and relates his fiery disagreement with the renowned showman and escapologist Houdini, a sceptic. The book is a testament to Conan Doyle’s belief in psychic revelation as well as an insight to the temper of the times. Houdini’s supreme skill as an exponent of illusion was ironically the basis for his underhand attempts to expose those ‘mediums’ he perceived as charlatans – the tensions between retaining personal professional dignity and following a cause in his obsessive project are reflected in the proposed piece, as we evoke the contemporary exponents of escapology, human endurance, conjuring and mediumship such as David Blaine, Doris Stokes and Kriss Angel. These latter contemporary illusionists are variously controversial, as are the practices of those preachers such as Benny Hinn who have become enriched through their performance of so called miracles to large congregations in America. The research to date draws on information held at the Lit and Phil, which for example, has received the journals and proceedings of the Society for Psychical Research since its inception.

The material was been the inspiration for a story which formed the dramatic structure of a promenade performance piece. Over the course of their journey through the building of the Lit and Phil, the audience encountered a family in crisis as a poltergeist wreaks havoc in their otherwise orderly life. The story was played out in a range of time frames, intertwining contemporary examples of people llving life on the edge of the unknown with historical perspectives on dislocation, disturbance and political upheaval. As Donald Rumsfeld once said “There are known knowns. These are things we know that we know. There are known unknowns. That is to say, there are things that we know we don’t know. But there are also unknown unknowns. There are things we don’t know we don’t know.” The audience in this scenario was witness to a world which comes alive at night, perhaps only once a year, and then dissipates like mist, leaving nothing but a shiver down the spine. While the doors remain firmly shut, there is nevertheless a small window open to the outside world. In this world politicians bluster and prevaricate, testing the truth to destruction and practicing prestidigitation of a far more slippery kind. As dawn breaks, the shadows in the library disappeared, the audience emerged blinking into the day, and the newspapers hit the stands with stories of the known knowns, the unknown unknowns and the things we wish we never knew. The Edge of the Unknown explored the cracks between them. 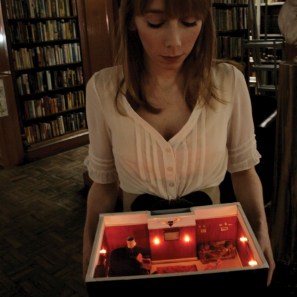 Kelly Jago, designer of Edge of the Unknown, created two versions of an imaginary room, in which we meet the Family as they tip over the Edge. This is a tiny replica of the place where the audience visits twice, the second time with added Poltergeist. Sarah Harris holds the family’s world in her hands. Photo: Kelly Jago. 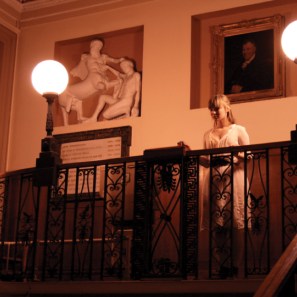 The Foyer of the Lit and Phil – a moment before the first song begins. 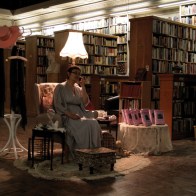 Pamela Gibb has an alter ego – Mrs Dorothy Smith is VAT registered, CRB checked and takes readings by telephone or face to face if you prefer… l-r Allie Garside, Steph Durkin, Hannah Cooke. The Celestial Administrators who meet you, great you, know everything about you. 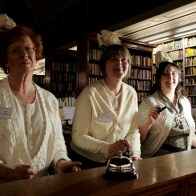 Kathy Paul, Catherine Lee and Kate Jones have a life after dark as Librarians on the Edge of the Unknown. Whatever you want to read, they can find it for you.

Way Through The Wood

(The story is not) set in stone news

A look at the map of Leeds

The owls are on their way...